I Bet That Stung - David Dimbleby Gets A Scorpion Tattoo 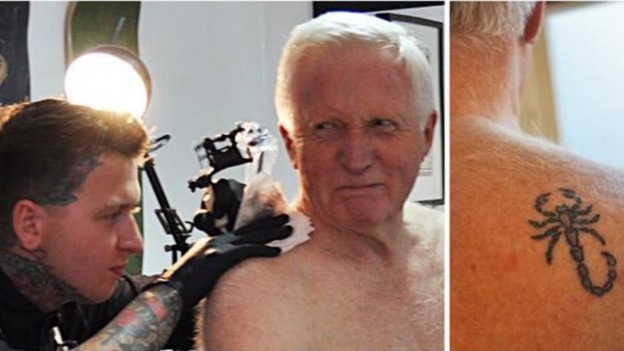 ///The 75-year-old was pictured proudly sporting the small tattoo during filming for a new series he is presenting called Britain and the Sea.

///He was offered a tattoo as he heard how tattoo art was introduced to the UK as a result of Captain Cook's South Seas adventures - he initially declined, saying he was too old. He told the Radio Times:

///"So instead they did something with black pencil that can be washed off. But when I saw it in a preview of the film I thought: ‘That’s a bit feeble.’ I thought it was wimpish having it just drawn on and I needed to man up.”

Did he need to man up?

Is it a bit silly?

Do we now call him: David "Stinger" Dimbleby?

I will now call him David Bumblebee
Go To Best Answer

B00
How do you get those pictures to appear in your posts Ed? And why don't us- the peasants have that facility?

andy-hughes
If DD is worried about what other people think of him, at his age, and given his career and status - something has gone wrong somewhere!

It may even be a hoax, but to be honest, I think it is his business, and not really in the national interest.

B00
If the 2nd picture is the just after look it looks kinda off. Tattoos are usually red looking and raised as in sore when just done.

Sqad
" Oh! I have always wanted a tattoo all my life"...in a whimpering, whinging, voice.

I bet his father is turning in his grave.

McMouse
I will now call him David Bumblebee

jomifl
Perhaps it would have been better on his ankle with a nice silver chain?

FredPuli43
It's a bit of fun at his age. But why a scorpion? Is he a Scorpio? I'd have to have a goat, and there are enough rumours about my secret activities as it is !

jno
why don't us- the peasants have that facility?

possibly because of a lack of enthusiasm among ABers to see B00's tattoos?

Not me, I'd love to see her hula dancer and her crown and anchor.

youngmafbog
Well I suppose he doesnt have so long to live and regret it.

jno
why would anyone regret a discreet tattoo on their shoulder?

the scorpion tattoo has the wrong number of legs

jno
you got something against disability among scorpions, bibblebub?

Do you know the answer?

I Bet That Stung - David Dimbleby Gets A Scorpion Tattoo

Sorry, we can't find any related questions. Try using the search bar at the top of the page to search for some keywords, or choose a topic and submit your own question.